Survey: Genome editing – what are the consequences for agroecology?

by
Staff Reporter
in
Viewpoints
March 4, 2021 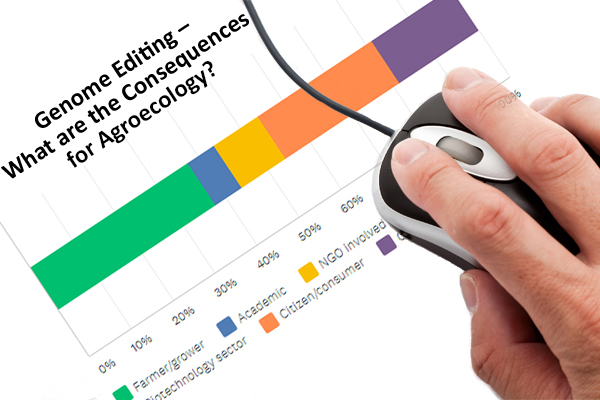 During this year’s Oxford Real Farming Conference Global 21 we took the opportunity to conduct a short survey to ascertain which potential threats to agroecology from genome editing (GE) most concerned the audience for Beyond GM’s session, Genome Editing: Assessing the Threat to Agroecology.

Findings suggest that the highest concerns (rated moderately high or high by respondents) for the way genetic technologies will impact agroecology are:

In spite of the explicit call to replace farmers with factories producing gene edited and synthetic biology protein sources, and the very public arguments that gene editing contributes to a land sparing and therefore climate-friendly, farming – highlighted at ORFC 21 – only 45% of respondents thought the ‘Creation of lab-based foods via synthetic biology means job losses for farmers’ was a threat to agroecology.

Of the 48 respondents 30 left additional comments on how gene editing might negatively affect agroecology. Below is a selection of representative comments.

“I think this sort of approach loses sight of the regionally appropriate crops/methods/seeds that are already growing and how these need to be honoured, safeguarded and kept current by continued use and selection. The beauty and resilience of agroecology is held in these amazing local heritage seeds.”

“Contamination in the field is relatively low and manageable in comparison with the potential for cross contamination through machinery, cleaning, storage, transportation and processing etc. Intellectual property is one of the greatest concerns – the ability to retain a ‘space’ in which independent plant breeding could continue and for the ownership of that to be community-based.”

“In the short-term, the introduction of GE crops will encourage many people to be far more interested in the provenance of their food and as such could well be beneficial to agroecological farming.”

“Genome editing is primarily about control – further concentrating power in the food system and locking-in dependence. It’s the opposite of what’s needed for resilient food systems.”

“Within the current economical framework, widespread adoption of GE crops will surely make agroecological farming financially inaccessible for most people?

“It will be side-lined by claims it does not understand the science and benefits. There will potentially be a smear campaign portraying agroecology as backward thinking and not progressive. The call to arms is for the sector to get educated on the science and come together with a robust argument for both the risks and positive options available.”

“I think attacking the science, as was done in the past with slogans such as “Frankenfoods” is no longer a particularly viable option as many influential figures within the farming and ecology scene understand the limits but also the potential for GE foods to feed people.”

“Having been a commercial grower/worker myself I know of the pressure to be pragmatic and accept that feeding people (with good food) has to come before complex ideology. But I would think it would be a great shame to lose the complexity and ecosystem building and life/livelihood that organic dairy farming (as an example) can bring and perhaps one way of preventing GE foods from proliferating is through strengthening communities (especially within organics) and through storytelling and artistic approaches such as song and poetry which highlights our values.”

“[Agroecology] won’t be able to compete on price or speed of growth.”

“Many people instinctively are against GM, but gene editing seems more fuzzy, less distinct as a concept and therefore harder to maintain a clear emotional objection to. It’s a majority of consumers with an emotional reaction that is most likely to carry the day and influence government policy. Even though the thought leaders of course need clearly presented even scientific arguments to make their case.”

“[Gene editing] is monopolising the discussion on sustainability when enabling small farming is paramount.”

But support for gene editing as well

Not all respondents were strongly against genome editing – and this is part of a trend we are seeing in the organic and agroecological movement. Although none of the respondents indicated that they worked in biotechnology, there were, nevertheless, some (4 of the 30, or 13%) who felt that the impacts of gene editing on agroecology were likely to be positive, for example:

“I’m not anti or pro GM, I look at individual cases on a case-by-case basis. So, for instance, I’m FOR Vit A modified rice, and crops modified to add nitrates to soil like legumes, and tolerate brine-polluted soils, but AGAINST crops which tolerate weedkiller as that means lots of weedkiller use. I’m sure that ‘agroecological’ and technologically advanced crops and methods both have a place in the future of farming. They can coexist.”

“[Gene editing means] enhanced crop growth. Reduced use of pesticides. Reduced use of fertilisers. Increased ability to support bio diversity as a financially viable option. Better protection against the effects of climate change. Increased varies as viable crops in the UK. Reduced use of antibiotics in livestock. Higher yield livestock Improved global competitiveness for industry.”

“Crops have been edited for thousands of years by breeding, it has allowed us to survive as a species, genome editing only speeds up this process and is only a good thing, they’re not achieving anything which couldn’t already be achieved by breeding, and it now just takes a few months rather than decades.”