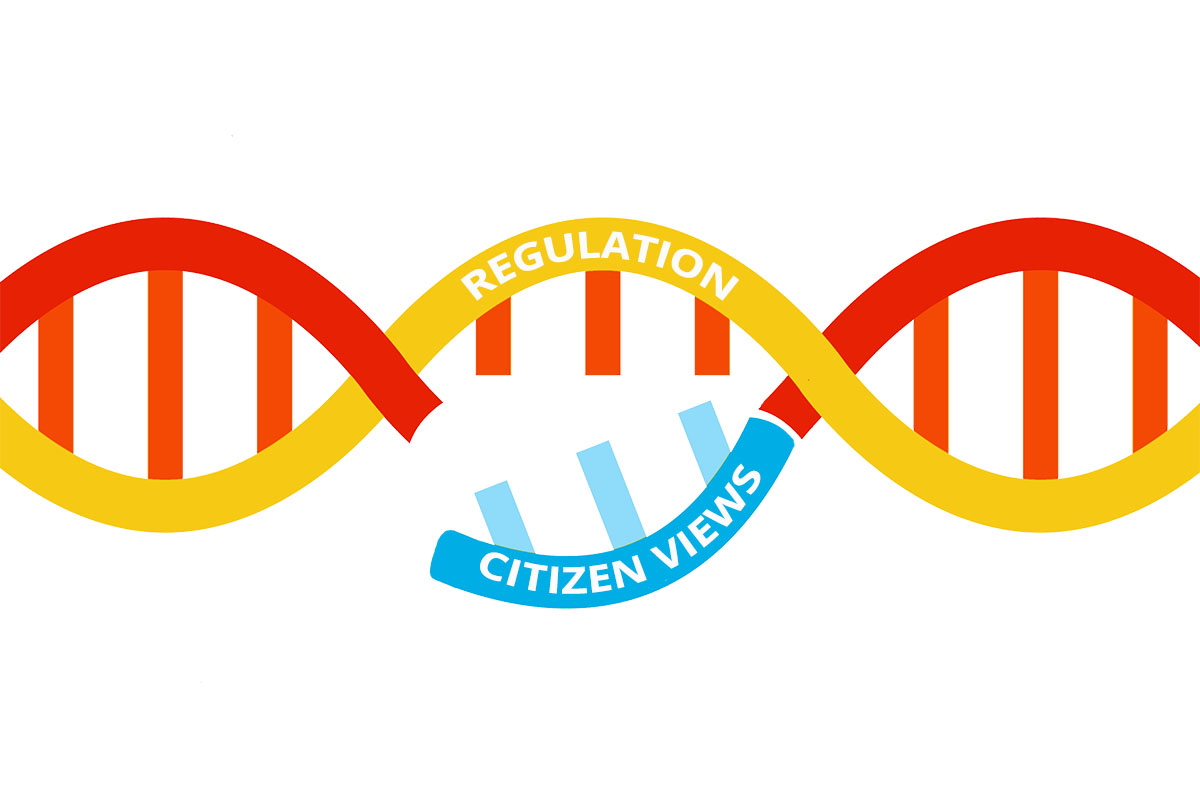 Our new review concludes it’s time to make meaningful citizen engagement part of the DNA of the regulatory process.


Who gets to decide how technologies are developed and used in society – and whether they are of genuine benefit or are a response to a genuine need?

It is all too common for such decisions to be taken by an elite few – often those who are actively involved in the development of a technology or who have political, financial or ideological interests in its development.

A great deal of lip service is paid to the idea of public engagement, but citizens – the ‘end users’ – who may take a different view or have different ideas about what is ‘necessary’ and what constitutes a ‘benefit’ or a ‘risk’ are rarely given the opportunity to have any meaningful say.

Yet, citizen views are integral to ensuring that technologies and science responds to the needs and wants of society at large.

Bringing them into the conversation requires a move away from the current risk and benefit assessments within a solely economic framework, towards a wider and more nuanced conversation about why a technology is wanted or needed within ethical and sustainability parameters. For this conversation to be genuinely useful to society, it must involve substantial citizen engagement. Engagement which is designed in such a way that it steers technological and scientific development from the beginning, rather than simply coming in at the end and being ‘educated’ about a new product.

A new review from A Bigger Conversation Voices From the Ground – Public Engagement in the Regulation of Agricultural Gene Editing explores the many facets of citizen engagement in the UK and elsewhere through the lens of developments in genetic engineering.

Copious amounts of data have been published in this area showing that, despite some promising initiatives, citizen engagement in the UK falls far short of its goal of genuinely informing policy. The review provides best practice case studies from other parts of the world, and recommendations for reforming science and technology governance to give citizen engagement a much more substantive role.

The task of designing citizen engagement so that it is representative, useful for policymakers and manageable for the members of the public involved is a challenging one.

It is likely that the best approach will be to adopt a variety of models to suit different technologies and stages of development. But there are certain principles which are particularly important for any model.

Upstream engagement of ‘many ‘publics’

For example, the process of citizen engagement must recognise that there are many ‘publics’, encompassing a huge diversity of backgrounds, expertise, values and viewpoints. For a citizen engagement process to capture this diversity it must take a collaborative, multi-disciplinary and multi-stakeholder approach where all voices are given an equal status.  One example of best practice is the UK’s National Institute for Health and Care Excellence (NICE), an independent body advising government, which gives equal weight to the views of all members of the committee, including lay members.

There is a growing consensus of the importance of engaging citizens early on, or upstream, in the development of GM and other controversial technologies. There are a variety of ways this engagement can happen and two of the most successful approaches for upstream engagement are consensus conferences and citizen juries.

Consensus conferences have been used in Denmark, where they have provided sufficient time and educational resources for a small group of lay people to develop enough proficiency to enter into dialogue with experts whilst maintaining autonomy to shape discussions.

Citizen juries can allow for a representative sample to be selected from across society. The Nanojury UK, which took place in 2005, is an example of how this can work well. A diverse group of 25 citizens were able to have a say in nanotechnologies from inception, meaning developers were informed by a wide range of values and desires different to their own.  In this way, technology development was able to be more democratic and less about only commercial interests.

As well as this upstream engagement, models need to be developed for involving citizens at detailed, technical stages to ensure that the implementation, as well as the theory, serves the needs of society. For this to be effective, science, technology and governmental bodies need to have structures in place to be able to listen.

This, in the end may be one of the biggest barriers to citizen engagement. It is vital that we focus on fostering institutional reflexivity i.e., embedding frameworks and cultures that ensure that institutions can monitor, reflect and question themselves and create space for adapting and changing according to shifting concerns and circumstances.

It is clear that good citizen engagement requires it to be embedded in law as a vital part of policy formation.

Norway provides an excellent example of this with its genetic modification (GMO) regulatory framework. The Norwegian government assesses each GMO application on a case-by-case basis, assessing not only safety, but also societal utility, ethical justification and sustainable development considerations.

In 2017, Norway rejected the import of a GM maize line authorised by the EU following public consultation on the basis that it “do[es] not contribute to sustainable development in a global context and that this plant is neither of benefit to society in Norway nor ethically justifiable”.

The UK and Europe, both of which are considering major changes in the way genetically engineered crops and foods are regulated, now have an opportunity to follow Norway’s lead in establishing science governance which not only includes citizen engagement but prioritises societal benefit in its legislation. The issue of science governance should be considered an ethical one, with philosophers and social scientists working alongside scientists and geneticists through every stage of the process.

There have been many attempts at citizen engagement in the UK. Some of the initiatives have been very promising such as the large-scale ‘GM Nation?’ debate in 2003 and the independent, government-funded Sciencewise programme which adopts public dialogue to inform policymakers on science and technology.

Although there is little evidence that they have impacted policy so far, there is potential to leverage them for greater good under a reformed governance framework discussed in the review.

The full recommendations of the review are:

1. The governance of science and technology should be based on a framework broader than narrowly focused risk and benefit assessments within a solely economic or short-term context. This requires a move towards consideration of why a technology or development is wanted or needed within ethical, equitable, democratic and sustainability parameters. It also requires a rebalancing of power and input relationships pivoting around an imperative of meaningful citizen engagement.

2. Considering science and technology governance as an ethical and communal task in this way requires a range of scientific disciples and not just geneticists and technologists to be actively engaged with equal standing.

3. Existing agreements, such as the Cartagena Protocol on Biosafety to the Convention on Biological Diversity, which reference and imply such moves and rebalancing, provide legitimacy and can provide the foundations for citizen-based innovation and governance of science and technology.

4. It is clear that there can be no single model of citizen-based engagement and governance of science and technology. However, some characteristics seem to be especially important for consideration:

5. It is important for countries like the UK and, indeed, a number of EU countries to examine and learn from those countries such as Norway and Denmark who have committed to and sought to implement more citizen-based engagement and governance of science and technology.

6. To this end, we would like to see the creation of an Observatory of Citizen Engagement established by civil society bodies and academic researchers to map, evaluate, formulate and disseminate “best practice” of citizen engagement and governance of science and technology.

7. We would like to see the UK, the EU and other parts of the world follow Norway’s lead in seeking to commit and embed citizen engagement and governance in law and in the culture of relevant institutions.

It is through this level of commitment that we can create a functioning democracy where citizen views are integral to ensuring that technologies and science responds to the needs and wants of society at large.