Survey: Citizen’s attitudes to genome editing in food and farming

by
Staff Reporter
in
Viewpoints
September 14, 2020 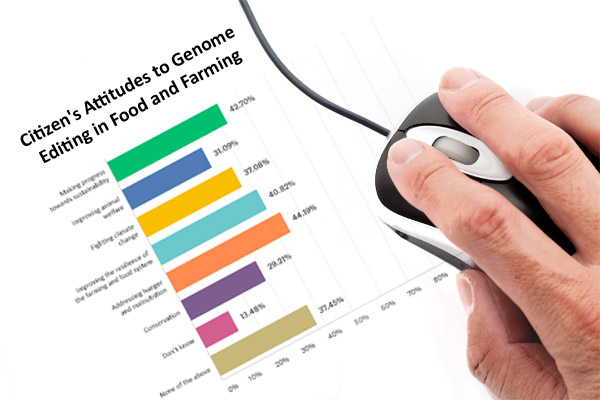 As part of our continuing programme during the global lockdown, we undertook a series of surveys or different groups to better understand their attitudes to genome editing.

The survey population was drawn from readers of the online Ecologist magazine and newsletter, as well as from A Bigger Conversation and Beyond GM social media accounts. This was not a randomised sample of the British public, and hence cannot be said to be representative. Nevertheless, we felt, that it would reveal useful data on the perspectives of citizens who are likely to have some awareness of and engagement with the issue. This is evident from the survey results.

Just under half of the respondents stated that they worked/or were active in some way in the food and farming sector, with a number also stating that they held professional positions either actively working in plant biotech or else for a critical NGO.

As a result, some of the more detailed responses were fairly sophisticated addressing issues such as concern about gene transfer or responding to the 2018 European Court of Justice ruling on genome editing. In addition, there was relatively high awareness of the synonymous terms for genome editing, although less awareness of the industry terms and specific techniques such as synthetic biology (synbio).

Over 80% of respondents stated from the outset that they held a ‘position’ on genome editing, and these positions became apparent in the responses to survey questions. Even so there was also evidence of a willingness to consider other views and, given the ‘eco’ pool from which respondents were drawn, a stronger than expected support for some potential uses of genome editing.

The key themes underlying concern or support for genome editing, and how and whether it should be regulated were apparent in the answers to all the questions.

Those sceptical about and opposed to genome editing tended to express some or all of the following positions:

That said, some of those who expressed these concerns (apart from those opposed from a values perspective) also felt that the technology in and of itself could have some merit and should therefore not be rejected out of hand. Only 38% of respondents stated that genome editing could play no part in addressing significant global challenges, such as hunger and malnutrition, and only 33% stated that it should be banned outright, with 27% stating that it should be subject to a moratorium pending further consideration.

Qualified support for genome editing was contingent on resolving the food and environmental safety issues or truly independent scientific research and oversight (although some acknowledged that this may be naively optimistic). Others also expressed resigned support – that it is inevitable or that it’s the only way that we can solve major global challenges in time.

Those in favour of genome editing tended to take the following positions:

Regulation – who, what, how?

When it came to the oversight and regulation of genome editing in food and farming, only 14% felt that no oversight was necessary beyond what is ‘normal practice’. Most agreed that product labelling (74%) and ongoing environmental and health monitoring post-release (77%) was necessary.

A key theme here related to who would oversee new breeding technologies, and what criteria would be used. Some respondents raised the Precautionary Principle as a guiding approach, while others stressed the importance of those involved in oversight being independent from industry. The United Nations was referred to several times as a trusted body for oversight as were citizen’s assemblies (see also below).

Despite the fact that 85% of respondents preferred government regulation over voluntary codes, and insurance liability provision, the lack of trust in government and corporate lobbyists was evident in repeated comments throughout the survey.  That said, there was also strong opposition to voluntary approaches, with corporations driven solely by the profit motive seen as totally untrustworthy to ‘self-regulate’.

Some 31% of respondents supported regulating some methods of genome editing and not others. Here comments tended to focus on the need for evidence-based research and taking a ‘case by case approach’ rather than specific examples. A clear ‘industry’ line focused on the need to regulate and assess the end product rather than the processes used.

Given the lack of trust in government and corporations, it is nevertheless surprising that only 50% agreed that citizens should play a greater role in the monitoring and regulation of genome-edited crops and food, with 22% opposing more citizen involvement.

The reason that there was not greater support for this approach is possibly related to the perception of the public as ignorant and easily swayed by social media. This view came especially from those who generally support the adoption of genome editing and who expressed suspicion towards ‘environmental pressure group marketing’. There would probably have been greater support if the question had been framed as “citizens who had been given impartial scientific information”.

That genome editing should be regulated did not seem to be in dispute though, as already noted, there were many qualifications to this around how and who. Some felt only scientists should have a say. Others respondents were familiar with the notion of citizen’s assemblies or public consultations and supported that integrated approach.

Most of these comments about citizens versus scientists fell along the familiar fault lines of the genetically engineered food debate, i.e. only the ‘right’ citizens should be involved in regulatory discussions.

Those who objected to citizen input focused on the necessity for citizens to understand complex laboratory-based genetic science. But citizens have other concerns, other knowledge and other ways of understanding – for instance through health, consumer choice and social impacts. Because of this early citizen engagement could substantially change the discussion around genome editing, moving it in a direction that acknowledged complexity and social responsibility. This, of course, could also change the way we look at research and regulation.

This is the case in Norway, the first country to include broader issues of societal utility (public good) and sustainable development in its GMO regulations. As part of the regulatory process, socio-economic considerations of genetically engineered products are evaluated, in part, through public participation in the decision making process.

The issue of how we regulate genome editing in food and farming will be coming into the fore in the next few years in countries all over the world. Most of the respondents to this survey, whatever position they held, showed a more nuanced awareness than is often seen and a willingness to engage in deeper discussion. Policymakers should be encouraged by this since it seems clear that genome editing is a multi-layered issue and its regulation will likely require this kind of commitment to greater nuance.