by
Staff Reporter
in
Viewpoints
September 18, 2020 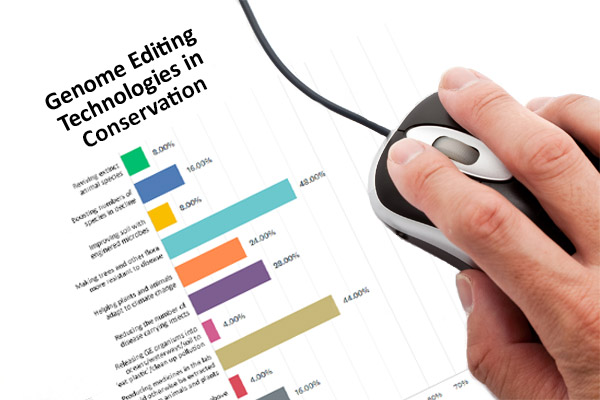 As part of our continuing programme during the global lockdown, we undertook a series of surveys or different groups to better understand their attitudes to genome editing.

Recent proposals by groups like the International Union for Conservation of Nature (IUCN) as well as research scientists and institutions and some rewilding proponents, suggest that a suite of genetic engineering (now called genome editing) technologies may support and even advance multiple goals in conservation.

The suggestion has been met with a wide spectrum of responses, both for and against. But absent from much of this discourse have been the voices of conservation groups themselves. It is extremely rare for civil society groups working in conservation to publish work on this topic or to have clear published policies stating where they stand on the use of genome editing and its regulation.

This is in spite of the fact that work in this area is advancing rapidly and that genetically engineered organisms released into the wider environment may interact with and have impacts on the natural world, on activities that take place within the wider environment such as agriculture and ultimately on human beings.

We therefore contacted major conservation groups, encompassing all specialities, to better understand where their thinking and their work is in terms opinions, policies and priorities.

The survey was sent to 83 major UK and European-based conservation organisations – we believe the first time UK conservation groups have been surveyed about this issue – between May and July 2020. This included relevant UK members of IUCN. The survey was also sent to a handful of specialist journalists and conservation ‘personalities’ as well as UK government backed agencies and commissions concerned with conservation. The total number of groups and individuals who were sent the survey was 102.

Response rates were disappointing, in part because of the disruption caused by the global lockdown, and in part because few conservation organisations have engaged fully with the issue of genome editing. Taken together, those who responded to the survey or provided reasons for not responding, meant we collected relevant data from 32 organisations.

The International Union for Conservation of Nature (IUCN) was due to have an in-depth debate on its position on genome editing during its World Conservation Congress in January 2020. Due to COVID-19 and travel and gathering restrictions this is now rescheduled for an as yet to be determined date in 2021.

This survey nevertheless reveals that both IUCN member organisations (those that actually responded) and other conservation organisations in the UK do not have a detailed or sophisticated understanding of the issue. Some IUCN members did not feel this issue is relevant for them.

Only one explicitly mentioned its support for what it felt was the IUCN’s “nuanced” proposal on synthetic biology.

Amongst our respondents only two specialist UK organisations had an official position on the issue. Two European organisations also had positions. The remaining respondents are essentially responding from the position of organisational priorities and norms or their own personal viewpoints. Some of these currently hold very senior positions within UK conservation charities, others are former employees in the conservation sector, academics or practitioners.

The UK organisations both had fairly coherent and detailed critical positions yet did not reject the technology completely. Both expressed clear concern about potential impacts on plants and insect life. One shared its experience of having its concerns dismissed by developers working in the field of genome editing.

However, neither organisation is calling for the technology to be banned. One stated it could still be used in a lab to produce medicines otherwise extracted from plants or animals and the other supports the technology if it is “Carefully regulated, with proper risk assessment and approval process in place before it is allowed.”

In contrast, the European organisations took a clear official critical position, calling for the technology to be banned. One cited the lack of scientific understanding and few proven benefits, while the other argued that “protected and setting aside habitats” are best way forward for species conservation.

Only one respondent, an individual specialising in ornithology, was very enthusiastic about the technology’s use in conservation and also supported light touch oversight e.g. industry voluntary codes.

The survey exposed inconsistencies in respondents’ positions.  One senior director at a large conservation charity with international outreach, for example, believed that the technology could be harmful but ‘didn’t know’ whether it should be allowed, banned or subject to a moratorium and felt that ‘those who create them’ should monitor genome edited species in the environment.

Similarly, another senior researcher working with plants and focusing on ‘genomic dynamics and its evolutionary and ecological impact’ agreed with the idea of a moratorium while being uncertain of the impacts of the technology, but nevertheless supported voluntary codes and monitoring by ‘those who create them’.

Another large UK organisation whose work involves amongst other things, preservation of land and landscape, stated that gene editing was relevant for them now but also ‘didn’t know’ whether it should be banned, allowed or subjected to a moratorium.

A respondent who sits on the IUCN taskforce on synthetic biology, expressed apprehension about how agribusiness will use the technology and that legitimate concerns (about safety, or interactions with the wider environment) will be ignored. Henevertheless felt the technology should be allowed, noting that “many species are facing extinction for which traditional conservation approaches are not working or cannot work”.

Taking a wider view of the various surveys our organisation undertook during the first half of 2020, the main differences between the responses to this survey and those of citizens and civil society groups involved in food and farming are:

Overall, the concerns of respondents to this survey relate to the poor understanding of the science, the potentially damaging environmental impacts and considering the risks of gene editing against the potential benefits. Respondents were nevertheless clear about the need for strong government regulation – a common thread through all our surveys.

If there was any group trend at all it was that there was a slight tendency for those working with birds to be more positive about the technology. Given that birds are a keystone species vulnerable to, for instance, habitat destruction, climate variables and exposure to pesticides, this is puzzling. A contrasting general trend in this survey was that those who worked more with insects seemed consistently the most concerned about the impact of genome editing.

While conservation is a worthy goal it is not the only worthwhile goal. What is more, conservation sits within a larger matrix of nature and humanity and involves inevitable compromises. IUCN has been exploring this issue internally and with its members since at least 2016. It is therefore frustrating that for the most part, conservation organisations, even those that are IUCN members, do not to seem to be engaging with this issue.

Multiple observers outside of the conservation arena have expressed concerns about the use of genetic engineering, whether it be genome editing or synthetic biology or gene drives, to help achieve conservation goals.

It’s true that some arguments for genome editing in conservation seem superficially attractive. However, a recent briefing from the Third World Network Biosafety Information Service spotlighted concerns over the bewildering array of GE technologies – including gene drives – that essentially convert the environment into the laboratory, and can affect not only target organisms, but non-target organisms as well. This has implications for all kinds of plants, including crops and perhaps especially organic crops, that could easily be contaminated through inadvertent contact with gene drive ‘biomachines’.

In fact, we don’t know the full extent of how gene drives – which force genetic changes through entire species in the wild ­– might interact with the natural world.

Research in genome editing plants and animals is more advanced and shows that CRISPR gene editing can cause large scale rearrangements of DNA and unpredictable mutations that can lead to unintended changes in the biochemistry of the organism.

In addition, as Beyond GM recently noted, it is impossible to separate nature from activities that take place within the natural world such as agriculture. Opening the door to genome editing with animals opens the door to other uses:

“It is also a relatively short step from re-engineering wild animals to conserve them to re-engineering them for other purposes. Geese, badgers and bison, for example, are all implicated in infecting farm animals with various diseases. What are the potential consequences of genetically ‘editing’ these wild animals so they don’t impact farm animals and therefore farm profits? Could a genome-edited wild animal unwittingly become a reservoir for zoonotic diseases for which we do not yet have viable treatments? What happens to engineered soil microorganisms when released in the wild? How might they alter the soil structure and microbiome if, for example, genetically engineered organisms become the dominant species?”

These are questions that the lay public, those who are paying members or who donate regularly to conservation causes, would expect conservation organisations, both big and small, to be getting to grips with. To do so may mean breaking out of campaigning silos (“nothing to do with us” “not part of our research brief”, “other groups are working on this so we don’t have to”) and working in closer collaboration with specialist groups already working with genome editing issues.