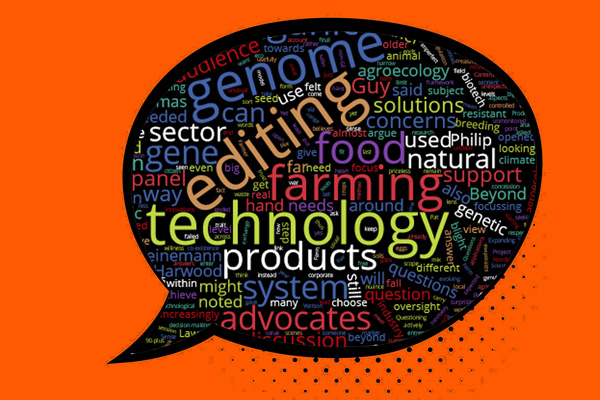 Panellists at our recent webinar Sense, Science and Sustainability tackled the question of genetic engineering in food and farming through a sustainability lens– leading to some surprising admissions.

Co-hosted with Natural Products Global the webinar extended the series of panel discussions held at Natural Products Europe and the Nordic Organic Food Fair which addressed the issue of whether gene editing could, as some advocates believe, be used in agroecological and organic food and farming.

The question posed was: can genome, or gene editing and agroecology co-exist in the sustainable food and farming mix?  Our panellists were:

While audience members might have expected answers to fall along the usual faultlines, with eco advocates saying ‘no’ and biotech advocates saying ‘yes’, the discussion that transpired had significantly more depth and nuance.

Philip Lymbery opened the session expressing concerns that widespread adoption of genome editing (GE) could entrench industrial farming systems. Nevertheless, he gave qualified support for the use of the technology to enhance some aspects of animal welfare. He asked:

“What if, what if chickens were successfully gene edited so the only eggs with female embryos are viable…If successful, this technology could be a revolution, ending at a stroke, the killing of birth of 5 billion sentient creatures a year.”

Lymbery also voiced support for cell-based meat analogues. While not all of these involve genome editing some of them do.

It was a controversial and unexpected view from a group that advocates for a sustainable, regenerative approach to farming and it set the tone the 90-plus minutes that followed.

Lymbery admitted that while these were not perfect solutions, we needed to “avoid a pursuit of perfection that might otherwise get in the way of much needed progress towards a better, safer, cruelty-free, agroecological world.”

Part of a bigger system

Organic farmer Guy Singh-Watson also offered some support for gene editing, noting: “I’m not adamantly against the technology” and that “If you could give us a blight resistant potato I would find it very hard to argue against.” He, nevertheless expressed real concerns around the system, which seems to go hand in hand with GM technology.

“These are startling admissions from two well-known and well respected advocates of regenerative and organic farming,” said Beyond GM director Pat Thomas “and yet, our public panel discussions over the last 18 months have suggested that Philip and Guy not alone. Under the right circumstances, a proportion of those in the natural and organic sector are at least interested in knowing more about genome editing.”

A step too far?

Several in the audience felt that even this level of qualified support was a step too far.

The audience was, as Thomas described them “impressively diverse” representing the biosciences, organic and agroecology, academia and the natural products sector, media from many different countries. In a torrent of questions and comments audience members questioned the longer term impacts of the technology, whether gene editing was genuinely an improvement on older genetic engineering technologies. Some pointed to non-GE alternatives – such as conventionally bred blight resistant potatoes and less invasive ways of sexing chickens that could achieve the same ends.

According to Thomas these divisions highlight an important “missing link”: most of us have not moved beyond the level of ‘what if’ thinking, into the nitty gritty details of how we achieve change in the farming system.

It’s how you ask the question

Professor Jack Heinemann opened the discussion further by suggesting a need to look at the way agricultural problems and solutions are framed. He noted, “one of the traps that we can fall into when we talk about a technology is we can narrow our vision to very precise kinds of questions and frames, in which the answer then is almost given to us.”

In his view many countries have made an “ideological decision” to solve food system problems through “private sector market-based solutions”. These solutions “concentrate wealth through the concentration of capital” but they also limit the way we think about problem-solving and the range of tools that we can choose to use.

Wendy Harwood, on the other hand, believes that genome editing is just a technology and that how we use the technology was the most important thing. Rather than a continued focus on how they are bred, she suggests focussing on the “characteristic the trait that we want in our crops”. She noted that genome editing is a rapidly evolving technology with applications beyond plant and animal breeding and highlighted that it was often used behind the scenes to research questions and guide breeders, even if it was not used in the final product.

Expanding on that point, Heinemann suggested that too often the discussion began with the technology and ended up “looking for all the problems that fit our technology, rather than starting with framing the large problems; the issues of sustainability and climate change, of food distribution.” He further suggested that instead of focussing technological innovations on breeding we might more usefully focus them on big issues like food waste.

Questioning whether gene editing could meet the more localised needs of farmers, Guy Watson said it is already becoming “increasingly difficult for farmers with different needs, be that based on their farming system, their soils, their climate, to get the varieties that they need”.

He expressed scepticism at the idea that GE would be any more democratic or small scale than older technologies, suggesting that ultimately it “will end up being controlled by large seed companies” who will be “interested in selling seed in large quantities across the globe with very little respect for local conditions and needs. That almost, inevitably, plays into the model that we’ve seen before with GM: high levels of high-intensity, high-input agriculture – the absolute opposite of agroecology.”

What does this mean for the natural and organic sector? Lawrence Woodward suggested that consumers still value the right to choose and are looking for products they can trust and which do no harm to them or the environment.

If, as advocates within industry and government desire, the products of genome editing are subject to neither regulation nor review, they will be free to enter the marketplace untested, unlabelled and unmonitored and find their way into products that currently market themselves to customers seeking natural or organic choices.

“Even for those people who are sympathetic or willing to give genome editing a shot,” he noted “that sympathy evaporates if there’s a sense of, it’s only going to lead to more of the same.”

If genome editing is deregulated there would be no legal reason to label such products. Yet within the organic and natural sector, some would argue, there is an extra ethical duty to uphold certain standards. Indeed, in the US where regulators are increasingly leaning towards deregulation, the answer has been the certification of “GM-free products”, via the Non-GMO Project. There are now more than 100,000 products that carry this certification.

In fact, the panel all felt that genome editing should be subject to some sort of regulation – though there was no real agreement on what the scope of that regulation should be.

In an unusual concession from someone in the biotech field, Wendy Harwood said:  “I agree that some form of regulation oversight is going to be needed.”

Woodward suggested that such oversight should take into account societal and citizen concerns and but expressed frustration that, thus far, industry and government had failed to come up with a framework for how to put these concerns at the heart of decision-making.

For those used to a war of words around genetic engineering in food and farming, this panel discussion was a refreshingly open exchange between individuals who are actively grappling with the idea of food system change. There are still big gaps – in understanding, in values and approaches – to bridge. Conversations around sustainability and co-existence are often ‘imperfect’ or incomplete, but the wiliness to keep talking is priceless.