The uncomfortable truth about GMOs and co-existence 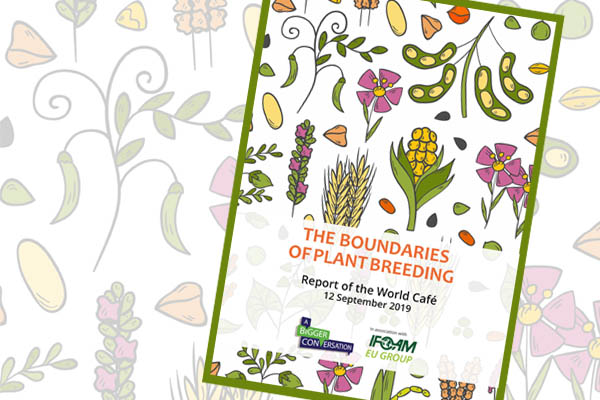 It is the stated and agreed policy amongst EU Member States, in post-Brexit Britain and in most parts of the world, that we must encourage and develop a range of agricultural systems – whether conventional, GM or organic – and that they must co-exist together.

There is no possibility of any overt political shift from this position in any major agricultural nation.

The uncomfortable truth, however, is that for well over a decade there have been no meaningful discussions, let alone viable policies, to address how co-existence of, in some cases, radically different approaches to food production can actually be achieved equitably, transparently and sustainably.

Pressure to introduce genome editing into food and farming means that these discussion cannot be put off for much longer.

But is the concept of -co-existence practical or placatory? Does anyone really want to acknowledge what it will take to have a co-existence that is more than a cloak to hide the domination of one approach over the others? Is it even possible to have a constructive discussion about genome editing in agriculture these days?

Putting it on the table

A Bigger Conversation – which is an initiative of the UK group Beyond GM – believes it is not only possible but necessary.

For the last 18 months this initiative has been convening roundtables, panel sessions and world cafés that bring together specialists from a wide range of perspectives to talk openly to one another about what they might disagree on – and crucially what they might agree on.

“We recognise that the discussion around the use of genetic engineering in agriculture has a long and difficult history.” says Beyond GM Director Pat Thomas, who heads up the A Bigger Conversation initiative.

“What we tried to achieve with these meetings is a space where participants could loosen up a bit and engage constructively with others coming from a different point of view.”

These conversations have already produced one report on Gene-edited Animals in Agriculture. A second report, The Boundaries of Plant Breeding is now available and tricky questions about things like co-existence are, it concludes, amongst the key issues which urgently need to be addressed.

In September 2019, A Bigger Conversation partnered with IFOAM-EU, to bring together a diverse group of plant breeders and those engaged in issues relating to plant breeding to discuss the discuss the idea of limits and boundaries in plant breeding.

The focus on values and worldviews allowed a more nuanced conversation to emerge over the course of the day. The new report, written by Beyond GM, follows that conversation and draws together observations on areas where there has been progress – and where more work needs to be done.

The European Court of Justice’s 2018 decision on targeted mutagenesis was an important backdrop to the to the day’s discussion.

In July 2018 the ECJ ruled that targeted mutagenesis produces genetically modified organisms which, fall under current EU regulations. Responses to the ruling varied but in an otherwise good-natured meeting, the ruling – alongside the organic sector’s stance that GMOs produced via mutagenesis, or any other type of genome editing, are not allowed in organic – provided the most consistent source of conflict.

Fuelling this was a belief, passionately held by some, that the urgent need to improve sustainability and climate change resilience meant that genome editing should be considered a viable tool, even in organic.

Differing responses to this idea of “using all the tools in the tool box” were revealing. There were varying levels of agreement that genome editing is “one tool in the toolbox”. No-one argued, however, that it was the tool.

By the end of the day:

For example, amongst the world café participants it was clear that different people had different approaches to and definitions for ‘sustainability’. There was, for example, no consensus as to whether sustainability criteria should include limitations on technology and economic growth, or whether/how societal values such as accountability, fairness, quality of life, individual choice and the right to health and welfare should be included.

In the UK, the EU and elsewhere new ‘green deals’ that claim to put ‘sustainability’ at their heart are largely predicated on the more widespread use of new biotechnologies. These technologies, it is claimed, will potentially improve yields, welfare, biodiversity, sustainability and profits in the farming and technology sectors. But only if regulatory limits are removed.

But while the biotechnology industry – at least publicly – acknowledges no limits to the development and application of its products, limits and boundaries are, nevertheless, core concepts of sustainability that all agricultural technologies need to be measured against.

Given the need for a sustainable and resilient agricultural sector this confusion over what it means to be sustainable was worrying.

As previously noted, many of the world café participants – on all sides – believed it was necessary to work together and that that the most positive vision for the future of agriculture was for a variety of approaches, or ‘tools in the toolbox’ to be used.

Certainly “pluriformity” – the acceptance and equal status of a range of methods in plant production – and the need for co-existence was welcomed in principle. But there was little clarity on what ‘equitable co-existence’ looks like in practice.

Important, but unanswered, questions around this include: How do we ensure that co-existence is not dominated by one side and/or forced on the other? What happens if one approach impacts on another e.g. through ‘contamination’ of land, seed stocks, breeding materials, or through reputational damage which undermines credibility and value?

The need for coherence

An important takeaway from the day was that plant breeding isn’t a monolith. There is room for debate and the focus of the debate can shift over time.

Nevertheless, as Thomas notes: “There is an urgent need to get to grips with the practical problems of a fair and transparent co-existence as well as the essential conflicts in approaching sustainability with a largely industrial model of food production that does accepts no limits or boundaries.”

“We also need recognition that while genome editing has been proposed as a kind of one-size-fits-all solution to future agricultural challenges, the challenges faced by farmers following the industrial model are very different from those taking a whole systems approach. For the latter group genome editing may offer few advantages.”

Encouragingly, it seemed clear that, amongst the plant breeding fraternity, the discussion is far more fluid and open than at the policy or activist level and perhaps it is here where some kind of consensus on pathways for moving forward can be found.

This, of course, requires the full spectrum of views from all plant breeding approaches being brought into the forum. A Bigger Conversation will continue to provide the space for this to happen.