Moving the discussion around GE animals beyond soundbites 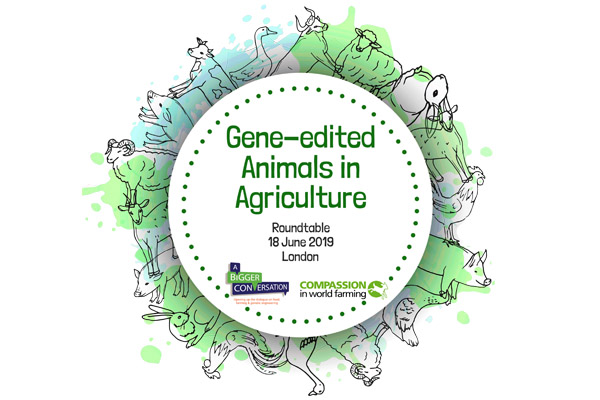 This week an unusually diverse group of stakeholders gathered together to discuss a rapidly developing issue in animal agriculture – gene edited livestock.

The day-long roundtable meeting, which was co-hosted by A Bigger Conversation and Compassion in World Farming, saw leading animal biotechnology scientists, ethicists, veterinarians, academics, faith groups, policy makers and others gather together for a robust discussion on what the technology means for the animals and for the livestock sector.

While gene editing in humans has attracted a great deal of media, and therefore public, attention around both the science involved as well as ethical issues, gene-editing of animals, especially those intended for the human food chain, have yet to become a topic of widespread public or consumer concern.

More often than not, discussions about gene-edited animals are focussed on claims made about what the technology can achieve, how they will be regulated and, in some corners, what can be done to remove regulatory restrictions and hasten these products to the market.

The meeting, which was conducted under the Chatham House Rule, aimed to explore in greater depth these kinds of pragmatic issues but also whether there is a need for gene-edited animals, what the ethical and philosophical issues around this technology are, what the alternatives to gene editing are and also how we assess risk and monitor outcomes pre- and post-marketing.

A Bigger Conversation is an initiative of Beyond GM in the UK and according to Director Pat Thomas, who also chaired Tuesday’s session:

“Like any disruptive technology, gene editing raises a number of complex issues; not simply around science and regulation but around the ethics, values and worldviews that inform these things. This is especially true when applied to farm animals, in part because of their innate sentience but also because they enter the human food chain. Too often stakeholders just end up trading sound bites in the media; this roundtable provided an opportunity for a more meaningful discussion among peers around a rapidly developing topic in food and farming.”

Among the attendees were those who were strongly for and strongly opposed to gene editing technology and yet there were, nevertheless, points of agreement around the table.

For instance, there was a general consensus that in various ways our food system is not currently functioning optimally, that it needs to change and is, indeed, changing. The direction of that change and who or what the main drivers of it will be, however, was a subject of some debate

There was likewise acknowledgement that certain diseases in farm animals, some of which can be devastating to entire herds, need to be addressed. Increased use of antibiotics and vaccines has drawbacks; it may be inappropriate or ineffective or have knock on consequences for human health.

In these instances, the case was presented that gene editing may prove to be a useful tool. Many participants seemed willing to accept this – or at least did not dismiss the case out of hand.

The value of genome editing in terms of precision, efficiency and accessibility was also set out but the notion that being more precise, at least in some aspects, automatically meant it was safer or more predictable, was challenged.

For the most part, participants seemed willing to accept that there is sufficient uncertainty about potential impacts of this form of animal breeding, on a variety of levels, to preclude the uncritical absence of regulation. It was also acknowledged that the goals and nature of any regulations need to be explored.

At various times in the discussion it was pointed out by those using the technology that genome editing is not a panacea for all problems and goals; that it needs to be seen as one component of a range of approaches.

The idea that gene editing was just a “tool in the tool box”, and that it was no different from conventional breeding in terms of outcomes for the animal was well represented around the table. From this perspective, the idea that the products of gene editing, once in the food chain, should be labelled was questioned.

But, others argued that there are a number of reasons for labelling and as with regulation it seems that this is an issue that merits more attention.

Those working with gene edited animals also see the technology itself as neutral, believing that it is up to us as a society to decide how we use it.

Counter to that, however, many participants expressed the view that that gene editing technology – in common with other technological advances – cannot be used or viewed in isolation and when used in agriculture, has to be seen and evaluated as part of the larger food and farming system. It was also noted that genome editing is a powerful and potentially transformative technology and therefore is, de facto, not neutral.

As one attendee noted “the tool in the tool kit is there to fix something, but we haven’t really identified what it is we are aiming to fix in the first place. It’s only by stepping back and asking what, fundamentally, is the problem we are trying to solve, that we can identify the right tool.”

Throughout the day this vigorous discussion highlighted not just differences of opinion but differences in how we think about approaches to farming.  It was clear from the discussion that there are different views about the degree and desirability of whole system management as opposed to primarily input management; although, in reality many farmers operate in an area somewhere between the two.

Several participants also noted the difficulty of introducing some ethical and welfare aspects into the discussion of genome editing.

Peter Stevenson, Chief Policy Advisor for Compassion in World Farming, for instance, believes that gene editing poses major threat to the welfare of farmed animals and pointed out that issues around ‘animalness’, or the essential nature of animals, as well as what animals are for, and what we use them for rarely form part of the discourse, although they are of importance to large numbers of people.

Although, at the moment gene editing of farm animals is not a widespread technology it does seek to address some widespread problems in some types of farm animals. Stevenson’s fear is that “it will entrench inhumane factory farming systems” which will make it more difficult for us to recognise and manage farm animals “as sentient beings with their own intrinsic value”.

Unlike genetically modified crops, which were introduced onto the marketplace without much discussion between stakeholders, gene-edited animals have not yet been commercialised and early discussions like this provide an opportunity for different stakeholders with different points of view to feed into the larger discussion about if/when they might be needed and how they might be regulated.

The experience of gene edited crops has also meant that those around the table had a baseline of experience and information which allowed them to get to the heart of discussions and disagreements more quickly.

According to Lawrence Woodward, a director of Beyond GM, “We’ve actually managed to have an intelligent, good natured and reasonably nuanced conversation about this technology, which I think is a major achievement. This was not a conversation conducted from behind silo walls and I hope that these kinds of dialogues can continue.”

He added that “There has been a growing disconnect between the hype that has come out of the media, research institutions and politicians about this technology as opposed to the more realistic view that was expressed around the room, and we need to continue to address that disconnect.”

A full briefing report on the day will be available soon and there are plans to expand the conversation by repeating the roundtable at a European level. Details will be made available on the A Bigger Conversation website as they are available.