A lively discussion about ‘organic GMOs’ 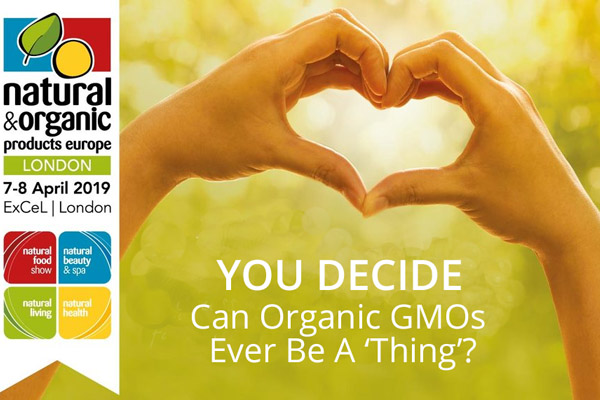 Panellists took up very different positions during a lively and provocative discussion on the question ‘Can organic GMOs ever be a thing?’ held last week at Natural & Organic Products Europe. Jim Manson of Natural Products Global reports.

With new genetic engineering techniques promising to be much closer to natural plant breeding than before, some in the research community argue that genetic modification – particularly new gene-editing techniques – has a role to play in the future of organic agriculture.

Last week’s panel discussion set out to test if the underlying philosophies of GMOs really are in harmony with those of organic, and whether farmers and the public ever would accept such a change.

The session was introduced by Beyond GM director Pat Thomas, who said that since last summer’s European Court of Justice ruling that new genome editing techniques did amount to genetic engineering and should be regulated in the EU as GMOs, the plant bioengineering community had been “pushing back hard” – with significant efforts being made to get the ECJ’s decision revised, and ultimately overturned.

Time to go public
Much of the discussion around the ‘natural’ status of the latest gene-editing techniques – and, crucially, whether such techniques should be allowed in organic farming – took place behind closed doors, said Thomas. It was time to bring it into a public arena, she said.

Jones said he wanted to explain “why from a scientific point for view, gene-editing is not in fact a GMO, and is compatible with organic ideals”.

“Jones said he wanted to explain “why from a scientific point for view, gene-editing is not in fact a GMO, and is compatible with organic ideals”.”

He said that the first applications of the new gene-editing techniques were to “rewild farmed crops”. This involved making wild alleles, the forms found in wild versions of those crops, which could be then expressed in the cultivated crops. This, he said, allowed for a “short cut” of traditional plant breeding that had taken place for over 10,000 years, enabling useful traits found in wild versions to be carried over into modern farmed crops.

Jones said that new gene-editing techniques (such as the CRISPR method) made cuts in the genome that were “identical to the cuts that occur all the time naturally though causes like ultraviolet light, coffee and alcohol…but also by the ones we purposely make in a process called mutation breeding, that is currently used in organic agriculture”.

Jones then reviewed plant mutations that are currently permitted under organic agriculture, making the point that “mutations do not make a GMO”. These included random mutations resulting from environmental mutagens and untargeted mutations generated by mutation breeding.

Conversely, conventional GM – where foreign DNA is inserted into a plant’s genome – is clearly prohibited under organic rules, he said. So, what about gene-editing?

Innovation opportunity
Jones was adamant that targeted mutations created using  gene-editing techniques – which he said were mainly indistinguishable from naturally occurring DNA sequence variations – were not just compatible with organic, but represented an opportunity for the organic sector to “innovate and show leadership”.

Jones said that the UK organic sector could “lead the world in ‘organovation’” and make itself more relevant and attractive to “younger, tech-savvy farmers and producers”.

Presenting the case for the organic sector, Lawrence Woodward – founder of the Organic Research Centre and a prominent figure on the UK organic scene – first wanted to revisit the title of discussion. “The session is titled ‘Can organic GMOs ever be a thing?’ But what we’re really dealing with here is genome editing, since traditional genetic engineering – involving the transfer of genes, the transfer of herbicide resistance and so on – is clearly outside of organic, and there’s no question about that.”

So, does Woodward think gene-editing has a place in organic farming? “The answer is simply no. Absolutely not. It doesn’t fit the concepts, it doesn’t fit the practices. And while we may use the same words – Huw used the world natural, for example – we mean very different things when we, in the organic sector, talk about natural and Nature.

Outlining the organic sector position on gene-editing, Woodward said it was “in line with the vast majority of NGOs, civil society groups and consumers – which is to agree with the European Court of Justice that gene-editing and similar technologies are GMOs, and should be regulated under the existing regulation”.

This approach, said Woodard was also in line with the organic sector’s approach on biodiversity and health, where there are concerns about “potential unintended off-target effects”. The sector had concerns too that the technology would lead to further industrialisation of agriculture. And he suspected that, rather than allowing new developments by small companies, it would lead to “further centralisation and corporate control of food and farming through patenting and intellectual property rights (IPR)”.

“Even if the EU changed its position and a said these technologies did not need to be covered by regulations on GMOs, this would not be compatible with organic. The reason is the underlying concept, the underlying core values of organic food and farming. And this is the concept that the health of soil, plant animal and man is one and indivisible. This is central, holistic concept of organic… the idea that the whole is greater than the sum of parts.”

Organic farming’s “respect for species barriers,” said Woodward meant that there could “never be a place for genome editing, or any activity that intervenes directly within the genome”.

Gene-editing’s role in sustainable agriculture was a separate question, said Woodward. The answer depended on what was meant by sustainability. Finding sustainable solutions in farming was, nonetheless, a huge challenge, that demanded a “plurality of ideas”.

It was a myth to suggest that gene-editing, or any other technology, could change the world, said Woodward. “The world is not changed by techno-fixes. And no technology is value neutral. All technologies bring with them a world-view. The development of these gene-editing technologies, the money for developing the,, the regulation of it – all of this is based on one view of the world.

A breach of trust?
Aileen Nicol, campaign director at the Organic Trade Board, gave the perspective of organic brand owners. She outlined the enormous effort that had gone into building and nurturing the UK’s organic market, now in its eight year of consecutive growth. She said that organic could be characterised as a ‘super brand’ – a holistic umbrella term that embraced a rich diversity of brands and products. A lengthy dialogue with consumers had resulted in building an organic brand that “commanded real trust”.

A long campaign of responsible messaging had convinced consumers that organic was “better for health, better for animal welfare, supported farmers and is better too for the planet and protecting wildlife”.

Nicol said she wanted the audience to reach its own conclusion on the central question about gene-editing and organic.  But, she said, “I would ask, would you ever want to change what amount to the core tenets of organic. And, if we did, what would that mean to the consumers we’re trying to talk to, and the trust we have built up with them.”

Put to the vote
At the end of the 45 minute discussion, audience members were asked to display a coloured card to indicate their answer to the session question – green indicating gene-editing was compatible with organic principles, red to show it wasn’t and yellow for undecided.

Commenting on the vote, Thomas told NPG: “I thought the vote was interesting. As far as I can tell form the photographs we took, there were about 10 who didn’t vote at all. Of those who did the remaining proportions are line with the UK population as a whole – that’s to say around two thirds against, and one third for, plus a couple of undecideds. But given the audience demographics, I’d say there were a surprising number of people there who felt that GM has something to offer organic. I think that is probably something the organic community should be alert to.”